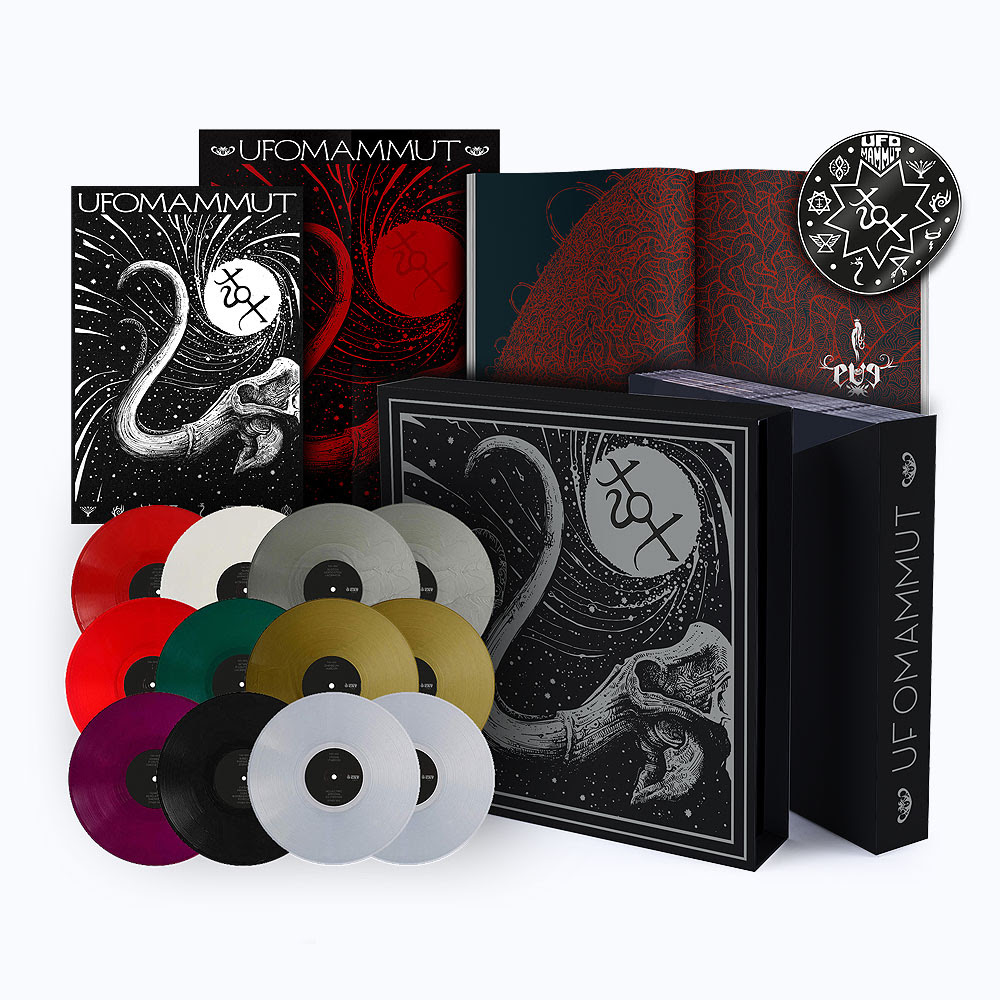 Italy’s mind-altering trio Ufomammut are marking their 20th Anniversary this year. Having recently returned from their latest European and North American tours, the band has a new surprise for their marvellous and loyal fans: on the 9th of September, Supernatural Cat will release a special anniversary box set, on both CD and LP, including 9 albums, all individually housed in sleeves with exclusive cover artworks, created specifically for this release. The box sets will include all eight studio albums; Godlike Snake, Snailking, Lucifer Song, Idolum, Eve, Oro, Ecate, 8.

Plus a new release, entitled XX, which features 6 revisited tracks, recorded during the last EU Spring Tour: Satan, Plouton, Lacrimosa, Infearnatural, Mars and Destroyer.
The box sets will also include a 64-page book with original covers, photos and lyrics to all songs with an additional poster, backpatch and sticker. The box sets will be on pre-order on the new Ufomammut official store, together with other exclusive merchandise.

THE MON: “Doppelleben” OUT NOW! and Streaming At Decibel Magazine

THE MON - the new solo project by Ufomammut's bassist, synth player, and vocalist, Urlo - presents its debut recordings in the form of the Doppelleben . Decibel Magazine is now streaming the entire album RIGHT HERE

THE MON, the new solo project by Urlo -- best known as the lead vocalist, bass and synth player in heavy trio Ufomammut -- officially announces its debut albumDoppelleben, due for release on Supernatural Cat on November 8th. An official video for the album’s title track has been issued through a premiere at Revolver Magazine as the artwork, track listing, and more are revealed for the first time.

The artist remarks on the new video he created for the album’s title track, “‘Doppelleben’ is a German word meaning ‘double life.’ The entire album circles around this concept; the idea we become different people over time, we change, sometimes we evolve, sometimes we involve, but the flowing of time is what we have left when we face ourselves. ‘Doppelleben’ is a ‘scary’ song; very introspective. Its video is like an ouroboros; a journey that never ends, it starts again and again."

Revolver offers of the song, “A sprawling ambient number more akin to the work of Allessandro Cortini or Tim Hecker than a doom thunderclap, ‘Doppelleben’ weaves darkly beautiful textures with synths, percussive bells and more — setting a mood of dark mystery and obscured beauty beneath a thick layer of grime.”

Experience THE MON’s “Doppelleben” video through Revolver Magazine at THIS LOCATION.

Also view the previously-released video for the album’s “Her” HERE.

Supernatural Cat, the label formed by members of Ufomammut and the Malleus Rock Art Collective, will release Doppelleben on CD, LP, and digital formats on November 8th, the vinyl to be printed with red metallic foil, including a twenty-page booklet with photos and more. Find physical preorders at the label’s webshop HERE and digital via Bandcamp where the previously released singles "Relics," "Souloop," and "Her" are streaming HERE.

Where Ufomammut create mind-expanding, heavy psychedelic, almost other-dimensional sounds, The Mon by comparison is far more intimate, looking inward, as Urlo explores and examines his inner most thoughts through music. In his own words, the goal of THE MON is, "to reach the boundaries of a spiritual soundscape in which the music becomes purification and atonement, a way to bring out to the world inside my soul."

For review copies of Doppelleben and coverage of THE MON in The Americas contact dave@earsplitcompound.com and all others contact lauren@rarelyunable.com.

Ufomammut's Urlo, the group's vocalist, bassist and synth player, has unveiled a new solo project under the guise of The Mon. Below, you can check out a video for a new track called 'Her'by Lù (Malleus Rock Art Lab)

The project sees Urlo reining in the expansive, psychedelic elements of his work with Ufomammut for something more introspective, pairing grunge-y guitar with metallic synths and his half-roared vocals.

The aim of the project, Urlo says, is "to reach the boundaries of a spiritual soundscape in which the music becomes purification and atonement, a way to bring out to the world inside my soul".
Just below, you can check out another new track, the first to be revealed from the new moniker, called 'Relics'.